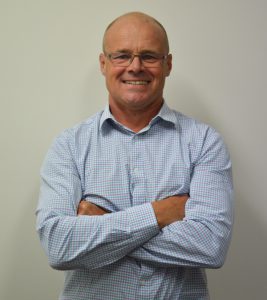 Tim graduated from UNSW in 1983

He commenced practising in Coonabarabran in 1984 and in 1985 he opened the current practise in Gunnedah and has been servicing the district for over 36 years. The Gunnedah practise has grown from one optometrist and one secretarial staff to its current 3 Optometrists, Lauren Finlay, Alison Stuart and himself, 6 optical dispensers and 3 ancillary staff.

In 2015, Tim purchased Richard Orr’s practise in Narrabri, another independent optometrist who had served his community for over 30 years. In this practice Tim now has 3 Optometrists practicing, Sebastian Egan, Debbie Baxter and Katina Nguyen as well as 2 qualified optical dispensers and 4 office staff to continue and improve eye care for the Narrabri district.

In 2017 Tim was awarded the Josef Lederer award for excellence in optometry due to his long standing service to the community, commitment to continued education, organisation of community health programs and contribution to charity. This is a prestigious award only given out only once every few years by Optometry Australia.

Tim was the first optometrist in the North West to complete his Ocular Therapeutics, and now co-manages and treats a vast array of eye disease and injuries in conjunction with local and metropolitan ophthalmologists.

Tim maintains his enthusiasm for optometry by staying abreast of the incredible technological improvements, from the latest computerized imaging and scanning instrumentation,  to the revolution of contact lens designs and materials, the increased sophistication of spectacle lens technology and the beauty and fashion of spectacle frames. The practise mantra is “total eyecare, quality eyewear”. He also enjoys passing on knowledge to University students.

When not working, Tim spends his time chasing his 4 children around the state with wife Katrina. He has just finished 15 years of coaching junior rugby and continues to keep fit with his involvement with cycling and triathlon. 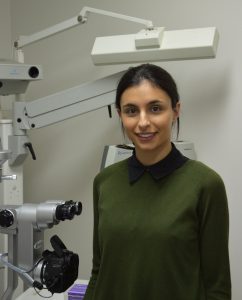 Lauren studied Optometry at the University of New South Wales graduating with honors in 2014 before moving to call Gunnedah home. During her studies, she completed her preceptorship at the Australian College of Optometry and private practice placement at Tim Duffy Vision Splendid in Gunnedah.

Lauren has a keen interest in eye disease management and children’s vision. In 2020 she undertook the Advanced Certificate in Glaucoma through the Australian College of Optometry, completing it with a high distinction.

Lauren has a therapeutics qualification and as such is able to prescribe medications to treat anterior eye diseases, infections and injuries. She works together with ophthalmologists to co-manage glaucoma and other diseases. She has also implemented behavioural optometry programs in line with ACBO (Australian College of Behavioural Optometry) recommendations.

Lauren is passionate about rural eye care both within Australia and internationally. She has worked for the Aboriginal Medical Service in Walgett and Collarenebri, and volunteered as a member of VOSH delivering eyecare to the remote villages in Romania in 2015. Outside of work, Lauren can be found spending time with family and friends, and running after her little boy with her husband Colt. 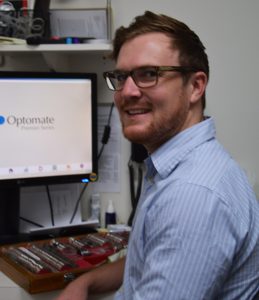 Sebastian is therapeutically endorsed and is able to prescribe medications to treat ocular conditions. He is able to treat acute eye infections and inflammation, including removal of metallic foreign bodies from the eye. He also works closely with Ophthalmologists in the region to co-manage glaucoma.

Sebastian is qualified to fit and prescribe soft and hard contact lenses. He also has a keen interest in managing anterior eye conditions including dry eye. Outside of work Sebastian enjoys spending time with his wife Bianca and their 3 children. 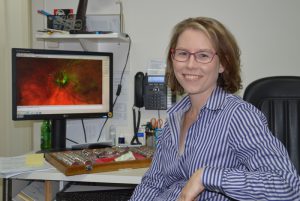 Alison has been with Vision Splendid since 2010, having previously worked in optometry practices in Dubbo and Sydney as well as working as a locum in various locations. But it is back in her home town of Gunnedah where she has settled.

Alison loves being a country optometrist and finds great satisfaction in the variety of the job. She has a special interest in ocular pathology and enjoys good relationships with both ophthalmology practices in Tamworth. Obtaining her graduate certificate in ocular therapeutics in 2012, Alison is able to prescribe drugs for many eye conditions which has helped enormously her ability to provide quality primary eyecare to the Gunnedah community.

Outside of work, Alison can be found running after her two young children. She also enjoys playing hockey and performing in musicals and plays.

Debbie studied Optometry at the Queensland University of Technology, graduating with honours in 1991. In the 30 years since her graduation, she has devoted her professional life to serving the Narrabri community as an optometrist.

Debbie has enjoyed the broad scope of rural practice and the unique challenges that it brings. She also studied Ocular Therapeutics and is qualified to prescribe medications to treat eye infections and inflammation, to remove foreign bodies from the eye, and to co-manage glaucoma patients with ophthalmologists. In 2020, Debbie completed the Advanced Certificate in Children’s Vision with a distinction through the Australian College of Optometry.

Debbie gains personal satisfaction in meeting with and finding solutions for her patients. She has found the addition of therapeutics, in conjunction with ongoing professional education, to be excellent for enhancing the level of care that she offers.

Debbie has lived in the Narrabri community for most of her life, being born and raised here and returning after her university studies. She has also spent time as a volunteer on the “Island Mercy” medical ship, providing eye care to isolated villages in Vanuatu. She loves being part of the local community and being able to raise her family here.